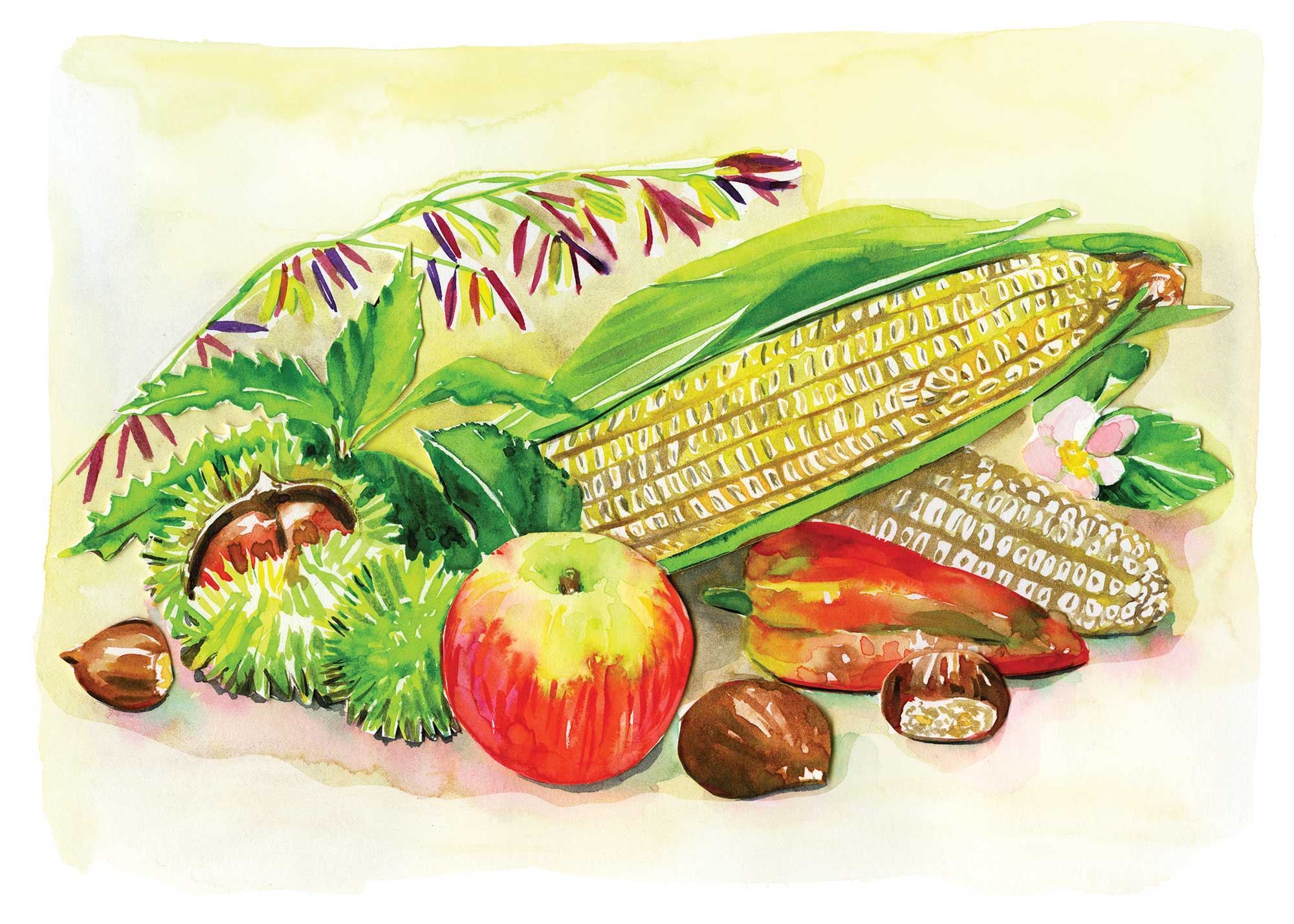 These lost foods are making a comeback

This story originally appeared in the Taste issue of Popular Science. Current subscribers can access the entire digital edition hereor Click here for a new subscription.

Bored with the uniform tastes born of modern industrialized agriculture, food historians, small-scale agricultural producers and curious foodies are resurrecting forgotten dishes – once-famous cultures ready for a second act. Their efforts are a clarion call to embrace bites as rich in flavor as their stories. Here are some long-lost bites that are making delicious comebacks.

Cocke’s prolific white dent corn barely resembles the sweet yellow cobs that line the aisles and markets. The grain gets its name from the shape of its grains: shriveled, with a dimple at the top. The taste, according to culinary historian David S. Shields, is unique. “Very good,” he says, with “flint health,” especially when used to make oatmeal or spoon bread. “So light, so creamy, so quick to fade.”

Its story begins in the 1820s when John Hartwell Cocke, a brigadier general in the Virginia militia during the War of 1812, crossed round-kernel white flint corn with Virginia white squash seed corn. The flint matured in less than three months, but was too starchy for easy grinding; pumpkin seeds crushed better, but took a long time to mature and bore only one spike per stem. A single sprout of the General’s Frankenstein could produce up to five ears – many in those days. The horse racing set loved it too, because its high sugar content gave the animals a kick.

“It was a national corn in the late 19th century,” says Shields, who heads the Carolina Gold Rice Foundation, a nonprofit that works to preserve heritage foods. During the 1900s, however, Cocke’s Prolific was crowded out by inexpensive yellow dent corn, the composition of which was better suited to mass production of products like syrup – it also made excellent cattle feed. Thanks to its versatility and hardiness, it is now the most widely grown cereal variety in the world.

A single family in rural South Carolina, named the Farmers, if you can believe it, kept Cocke’s Prolific alive in memory of a beloved patriarch, who had farmed it since the 1930s but died suddenly. in 1945. In 2017, Shields caught wind after a Farmers friend started selling grain on Craigslist. Once Shields’ foundation broke the news of the long-gone corn, people across the United States began asking for seeds. Now, says Shields, “it’s grown from Maine to Arizona.”

Common rainbow bells mellow as they ripen, but Beaver Dam peppers undergo a total flavor overhaul with age: young greens are a bit acidic, but eventually turn red and become bold, with a taste that is both sweet and spicy. Chopped and boiled with vinegar, sugar and pectin, the vegetable adds a unique twist to homemade chili jelly. People also like it in salsa.

“This [has] a subtle, pungent heat. It’s the best of sweet peppers with some spicy elements,” says John Hendrickson, a local farmer who grows the variety.

The vegetable originally came to the town of Beaver Dam, Wisconsin two years before the outbreak of World War I when Joe Hussli left the Austro-Hungarian Empire with several seeds. Although never grown commercially, the pepper was passed down through the Hussli family and others. Like many other heirloom bites, however, it fell out of favor as hardy hybrid vegetables filled grocery stores in the mid-20th century.

Still, Beaver Dam’s prized chili has survived thanks to groups like the Seed Savers Exchange, an organization that preserves heritage foods. Hendrickson bought seeds from them over a decade ago and turned to Hussli’s grandson for some growing advice. For example, he learned that the stems stretch in unusual ways, so he grows them in pairs that support each other. The Hungry Cheeseheads were ready: “They have so many followers among the people who love them,” he says.

The food is so beloved that in 2014, Diana Ogle — a Wisconsin transplant fascinated by the city’s namesake vegetable — started the Beaver Dam Pepper Festival. It features local businesses, artisans and, of course, the famous products themselves. Hendrickson plays an essential role: he is the only farmer who sells the characteristic harvest of the hamlet. “I’m the ‘pepper guy’,” he says.

More than a millennium ago, Native tribes migrated to the area we now know as Minnesota, Wisconsin and Michigan, inspired by a prophecy to travel to a place where food grows on water. They found wild rice there, which is not rice at all, but rather the fine, black grain of a tall grass that grows well in calm waters with muddy bottoms. The tribes called him manoomin in Ojibwa, the language of the Chippewa.

“It was one of the staples that my community relied on, especially during the harsh winters,” says Roger LaBine, a member of the Old Desert Lake Band of Lake Superior Chippewa Indians. Harvested in late summer, manoomin is rich in protein, fiber, B vitamins and zinc.

By the early 1900s, after centuries of colonization, the wild rice paddies were largely lost. The effects of logging have been particularly acute: dams built to raise water levels and facilitate the floating of fallen trees downstream have drowned the rice, which grows best along shallow banks. “The entire surface of the rivers would be covered with logs. Any river rice that was growing was wiped out,” says Barb Barton, an aquatic resource specialist with the Michigan Department of Transportation and author of Manoomin: Michigan’s Wild Rice Story.

Barton and LaBine work to bring him back. Over the past few decades, their efforts have identified the best growing beds, held harvesting workshops, and educated local people on how activities like boating, swimming, and mining can disturb the plant. According to LaBine, there are now 14 wild rice beds in the Lac Vieux Desert Band ancestral territory, with more to be discovered in the area, allowing more people to experience the earthy, nutty flavor of the manoomin. Barton eats his with blueberries, cinnamon and honey for breakfast. “It’s fantastic,” she says, “and it’s very versatile in terms of the things you can do with it.”

[Related: “Why is it so expensive to eat sustainably?”]

Not to forget the silky voice of Nat King Cole, chestnuts are delicious. Even unroasted with no open fire in sight, the American variety is a treat, high in fiber and vitamin C, with a rich, sweet flavor thanks to its fat content, higher than chestnuts from some Asian countries in ballast.

About 120 years ago, forests from the Mississippi River to the Atlantic Ocean produced reliable bounty of snacks. Yet today much taller varieties from China and Japan are the norm. This size difference turned out to be the downfall of the American Chestnut. “That’s how we got into this mess in the first place,” says Hill Craddock, president of the Tennessee chapter of the American Chestnut Foundation.

Americans in the 1800s wanted big nuts, and Cryphonectria parasitica, a blight-causing fungus, likely hitched a ride on Japanese tree nursery stock as early as 1876. The pathogen produces oxalate, an acid that attacks plants lacking the enzyme to neutralize it. Over the next 60 years, the disease destroyed some 3 billion trees.

According to Craddock, who teaches biology, mycology and dendrology at the University of Tennessee at Chattanooga, many researchers consider the American chestnut to be functionally extinct. The blight does not kill the roots, so the trunks can grow back. But these plants – of which around 400 million still survive – are shrubby and disease attacks them as they grow. They don’t bloom often enough to spread, if at all.

Plans to combat the scourge are well underway. A collaborative team from the State University of New York College of Environmental Science and Forestry in Syracuse is editing lab-grown tree embryos with a wheat gene that helps fight the fungus, and members of the American Chestnut Foundation are crossing species local and Chinese. Hybrid stems planted over the past decade in Virginia, North Carolina and Tennessee are already producing thousands of chestnuts. The ultimate goal, Craddock says, is to restore the forest ecology of the eastern United States by adding millions of modified trees and making their fruit abundant for animals and humans, who once enjoyed them.

There were once nearly 17,000 varieties of apples in North America, many of which traveled west on wagons (and actual trains) in the 1800s and early 1900s. Settlers transported cuttings and young trees that produced fruit they loved; when they arrived where they were going, they grafted cuttings onto existing trees or replanted them. Many fruits died when the encampments failed. In other cases, the west direction just didn’t bother to plant. Today, there are less than 5,000 of these original heirloom apple breeds, and those that still exist are hard to find.

Such was the story of Sierra Beauty, a crispy apple with buttery notes and an aroma strangely reminiscent of pineapple. The fruit itself originated in California, was discovered around 1870 (some speculate near its namesake foothills) and eventually traveled north to become a mainstay of the Oregon Nursery Company. The company closed due to financial problems just before the Great Depression, leaving its signature apple to the history books.

It wasn’t until the 1970s that a group of heirloom enthusiasts “rediscovered” it in a small orchard near Mendocino, California. Turns out owner George Studebaker picked up a single tree while on a wagon ride around the Sierra Nevada foothills in 1906.

Today, the Gowan family maintains hundreds of rows of Sierra Beauty trees, which are sold on the farm and wholesale. Co-owner Sharon Gowan says the fruit’s firm flesh and strong flavor make it ideal for baking. And it’s especially good for anyone interested in making hard ciders, which is how the orchard sells most of its Sierra beauties today: pressed, fermented, bottled and chilled.