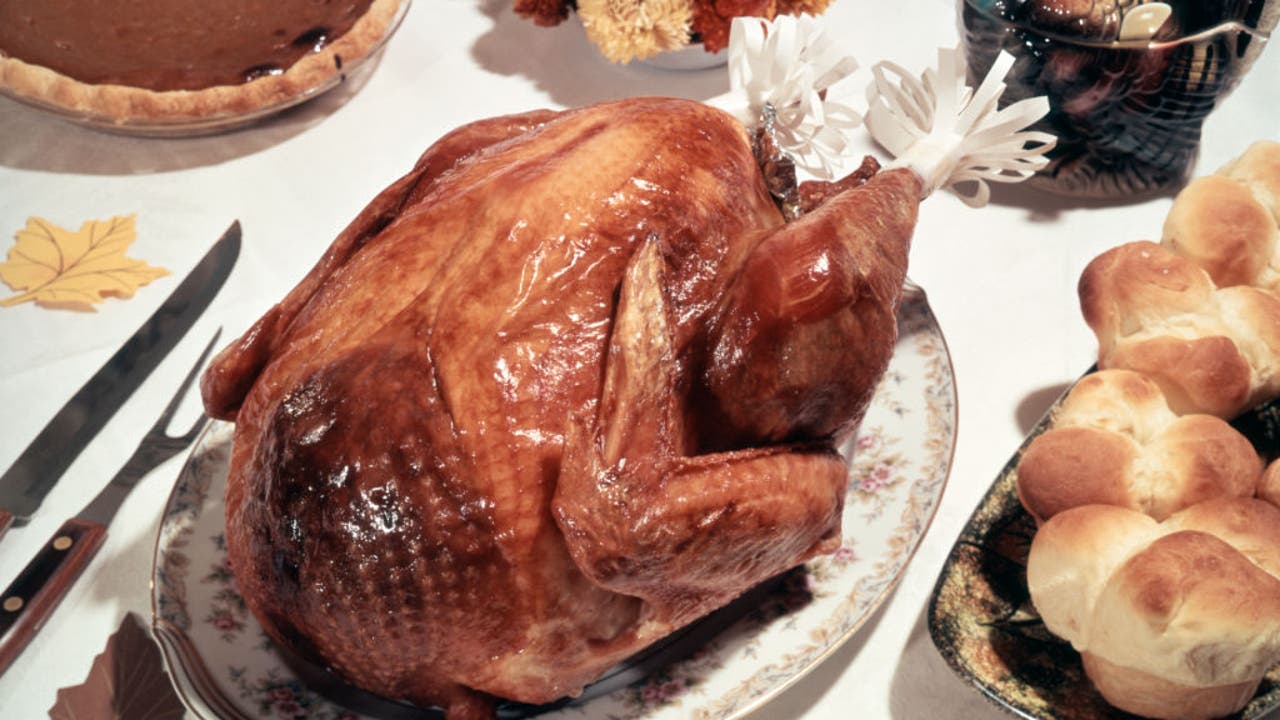 The origins of our traditional foods

Dangers of frying a turkey

Ahead of Thanksgiving, the United States Consumer Product Safety Commission (USCPSC) warned of the dangers of frying turkeys. (Credit: @USCPSC via Storyful)

Turkey has become synonymous with the Thanksgiving holiday, as have dishes like stuffing, mashed potatoes, candied yams, cranberry sauce, and pumpkin pie.

But historians cannot agree that the turkey was served at the first annual feast between the pilgrims and the Wampanoag tribe. And according to Smithsonian Magazine, the modern Thanksgiving meal bears little resemblance to what was eaten in the fall of 1621.

The oft-fictionalized feast of 1621 more specifically consisted of ducks or geese, neither of which was the centerpiece of the meal like the modern turkey. Corn was served, but not the way we eat it today.

Venison was on the menu, as were herbs, onions and oats which were used to stuff birds or fish.

The modern Thanksgiving meal took several centuries to develop. And many dishes have their origins in Sarah Josepha Hale, editor-in-chief of the popular women’s magazine “Godey’s Lady’s Book”.

Hale is known for creating the nursery rhyme â€œMary Had a Little Lamb,â€ but she has also become an essential figure in setting Thanksgiving and its modern menu.

She asked 13 presidents in the 1800s to recognize Thanksgiving as a national holiday. His efforts included posting Thanksgiving recipes and menus featuring items such as turkey, sage dressing and mashed potatoes, the Smithsonian reported.

Abraham Lincoln became the first president to side with him in 1863, acknowledging Thanksgiving amid the turning point of the Civil War.

Records show turkeys in the Plymouth area during the pilgrim days, but William Bradford – the governor of Plymouth Plantation – sent a group of men to hunt. They might as well have come back with ducks or geese.

Turkeys have their origins in central Mexico and the southwestern United States.

The bird had been domesticated twice in these areas around 2,000 years ago. Experts believe that Spanish explorers brought turkeys from central Mexico to Europe, and then English settlers brought the birds back to their colonies.

Pilgrims used herbs, onions, and oats to stuff their poultry or fish, but modern bread-based stuffing did not appear until the late 18th century.

Historians believe that potatoes originated in Peru around 10,000 years ago. The History Channel said the Spaniards probably brought food back to Europe around 1570 and made it a staple culture.

English settlers later brought the crop to the eastern United States. Even so, they had no place at the first Thanksgiving. The harvest had not become popular enough with the English to have been celebrated.

There was no pumpkin pie on the first Thanksgiving. Historians say both groups lacked the butter and wheat flour needed to make the pie crust.

And even if they had had it, they wouldn’t have made the oven needed to bake it.

Even so, the History Channels stated that English settlers often dug pumpkins, filled the shells with milk, honey and spices to make custard.

The version we know today, the creamy, spicy cinnamon and nutmeg version appeared in the 1800s.

Maize, in many forms, was available in abundance to pilgrims and natives. It had been domesticated in Mexico over 8,000 years ago.

According to the History Channel, the corn was taken off the cob and made into cornmeal. The natives and pilgrims often boiled and crushed the thick product into a corn porridge thick like porridge.

Sometimes they sweetened it with molasses.

Cranberries are native to North America and most likely could have been served on First Thanksgiving. But it wouldn’t have been in a sauce like the modern condiment.

Neither the natives nor the Pilgrims would have boiled the berry with sugar with the intention of using it as a sauce for the meat, the Smithsonian said.

This story was reported from Atlanta.