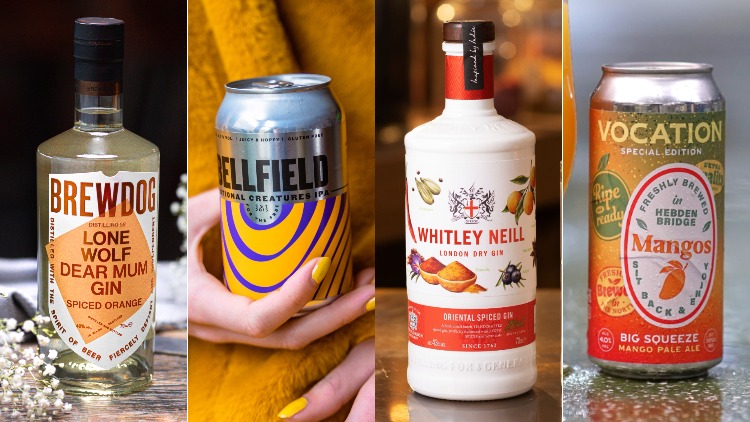 The spirit is said to be “brimming with citrus flavors, delivering a hint of marmalade that gives a tangy yet warm mouthfeel” and was made at the company’s new distillery in Aberdeen.

Dear Mum Gin is a limited edition drink with only 1,000 bottles made that claims to have flavors of blood orange and candied orange peel while retaining its juniper bite, and is recommended to be served with tonic , ice and a slice of blood orange.

BrewDog Distilling Co Director Steven Kersley said: “Our bold and zesty Dear Mum gin has arrived just in time for the special day. On top of LoneWolf’s bold juniper backbone, we’ve layered on more flavor by distilling fresh botanicals such as blood orange peel, sweet orange peel and a selection of fragrant spices, including all the spices, ginger and cinnamon.

“The aroma is unmistakably LoneWolf, however, there are top notes of candied orange and spicy ginger which, when diluted with your favorite tonic, balance perfectly against a bold juniper background. We would have must have distilled over 950 bottles; it is a delicious gin.

The latest launch in the Halewood Artisanal Spirits portfolio was inspired by founder Johnny Neill’s travels to the Indian subcontinent in the late 1990s and is distilled with an emphasis on the exotic flavors and aromas of the Orient. Juniper is complemented by “sweet, warm cardamom with sweet, bright citrus, offering a juicy character followed by notes of cumin.” Its finish is said to be full of pepper and savory spices.

James Stocker, Marketing Director of Whitley Neill Gin, said: “The City of London Distillery and Bar, home of Whitley Neill Gin, provides us with a fantastic tool to listen to what gin fans are looking for and experiment with new botanical combinations. and flavors. We see huge opportunities for growth in the dry gin category and our new Oriental Spiced Gin plays perfectly in this area with peppery and savory spice notes – perfect for people with a more savory palate.

The eye-catching white bottle features detailed images of the exotic botanicals and spices (including coriander, turmeric, ginger, chilli, cumin, grains of paradise, saffron and star anise), which give the gin its unique flavor, which is guaranteed to stand out both on the shelf and behind the back bar.

Whitley Neil Oriental Spiced Gin (43% ABV) is available to order now with an RRP of £26.

The microbrewery that operates a tavern near Lakedown Trout Fishery Lakes, Burwash, is the brainchild of brothers-in-law Jamie Daltrey, Christopher Rule and Des Murphy, and is known to be co-owned by The Who singer Roger Daltrey.

The New England Pale style light colored beer combines Citra, Mosaic and Amarillo hops and adds to the producer’s range of beers that is suitable for vegan and flexitarian drinkers.

In what has become something of a tradition over the past few years, the women of the Edinburgh company have come together to create a beer on International Women’s Day. The latest is Rational Creatures IPA.

Bellfield said, “We started by tasting beers of similar styles and smelling a variety of hops that would achieve our desired juicy hop profile, settling on Idaho 7, El Dorado and Azaca as our primary hops. It was great to be able to get together in real life in our beer garden this year, rather than the Zoom session we had last year.

Rational Creatures IPAs are flocking to the company’s dining room and £1 from every pint sold this week will be donated to Scottish Women’s Aid.

One-Eyed Rebel has launched a botanical spiced rum from The Spirit of Manchester distillery.

The rum is said to be “cut deep with ginger, with undercurrents of vanilla and a blazing heart of rich cassia” from The Spirit of Manchester Distillery, makers of Manchester Gin.

Available in three varieties, Fiery Spiced Rum, Black Cherry Rum and Passionfruit & Coconut Rum, these versatile botanical spiced rums pair well with cola, ginger beer or simply over ice. Plus, they can be used in a variety of cocktails.

It was recently announced that One-Eyed Rebel Black Cherry rum is in stock at Hammonds of Knutsford, C&O Wines and has just landed in select JW Lees Brewery pubs among other outlets.

The Yorkshire Vocation craft brewer is set to launch a trio of new low-alcohol beers in a bid to open up the craft market to those who want lower-alcohol options.

The first of the trio is called Lower Altitude and is a 2.8% ABV table beer, which is made using a blend of Simcoe, Sabro and Talus hops to provide a tropical fruit, stone fruit flavor and a hint of coconut.

The second is Big Squeeze, a 4% ABV Mango Pale Ale. Big Squeeze is also available through the same channels as Low Altitude, including commercial drafts. The flavored lager is said to have a big, fruity mango flavor that is balanced with the floral, lemony bitterness of the Mosaic hops.

Vocation Brewery’s Head of Brewing, Matt Howgate, said: “We’re really excited to launch these three low-alcohol beers. We’ve been working for a long time to make these low ABV beers, which still have the great flavor profile expected of Vocation beers. We’re thrilled to have partnered with low- and alcohol-free craft beer specialist Mash Gang to brew Permanent Vacation. This light and refreshing beer will transport you to the beach with its heavy dose of summer citrus and a clean, crisp finish that many of us crave at this time of year.

“Lower Altitude is our first table beer and at 2.8% ABV provides a flavorful beer that is more accessible to more drinkers and with Big Squeeze we squeezed as much mango into the beer as humanly possible. .”

If you have any new products that are hitting the market, send details with high resolution images by Thursday noon for possible inclusion in Friday’s article to [email protected]​​​​​​​ . ​

Foods that help you sleep or keep you up at night