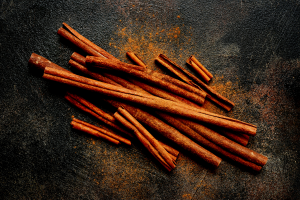 Cinnamon is a common spice found in most Indian cuisines. It is used in whole form as well as in powder form. Cinnamon comes from the inner bark of a tree known as “Cinnamomum”. The history of this spice dates back to ancient Egypt, where it was considered a gift for the royal family. It is a common spice found in every home and has a distinctly sweet and warm flavor. This cinnamon flavor and aroma is due to its oily part, which is rich in “cinnamaldehyde”, the compound that contributes to the powerful health benefits of this spice.

Ceylon cinnamon and Cassia Cinnamon. Of the two, Ceylon cinnamon is considered the better variety. This variety is native to Sri Lanka, India, Madagascar, Brazil and the Caribbean. The spice has been commonly used as a medicine for coughs, sore throats, arthritis, etc.

Cinnamon may boost cognitive activity and offers protection against brain damage and neurogenerative disorders, including Alzheimer’s disease and Parkinson’s disease.
This spice can improve memory, concentration, alertness and visuomotor speed. Additionally, the scent of cinnamon alone has the potential to increase alertness.

Manganese is found in relatively good amounts in cinnamon. One teaspoon of cinnamon contains 22% of the recommended daily value of manganese. This mineral plays a number of roles in the body, some of which include supporting bone health and thyroid function. It also aids in macronutrient metabolism and helps regulate blood sugar.

Cinnamon can help prevent and treat cancer, as it has antioxidant, anti-inflammatory, antimicrobial, anti-carcinogenic, and anti-tumor properties. Several research studies have shown that cinnamon extracts inhibit the growth and proliferation of tumor cells and induce apoptosis (programmed cell death) of certain types of tumor cells.

Cinnamon can act as a natural digestive aid, reducing indigestion, nausea, upset stomach, and more. And due to its carminative properties, cinnamon can also help relieve flatulence.

7. May Help Prevent and Fight Candida

With powerful antimicrobial properties, cinnamon can help fight Candida intestinal fungus. One study used a combination of cinnamon oil and Pogostemon oil to treat 60 patients infected with Candida, and 100% of them saw improvement or were cured; in conclusion, the combination of the two oils had potent antifungal effects against three species of Candida.

8. Reduces the risk of heart disease

Cinnamon protects heart health and may reduce the risk of heart disease. It can help lower LDL (bad) cholesterol, lower blood pressure and lower blood sugar. And as stated above, cinnamon has powerful antioxidant and anti-inflammatory properties.

The Starbucks drinks our editors couldn’t live without

How can you lower your blood pressure fast? What foods help?