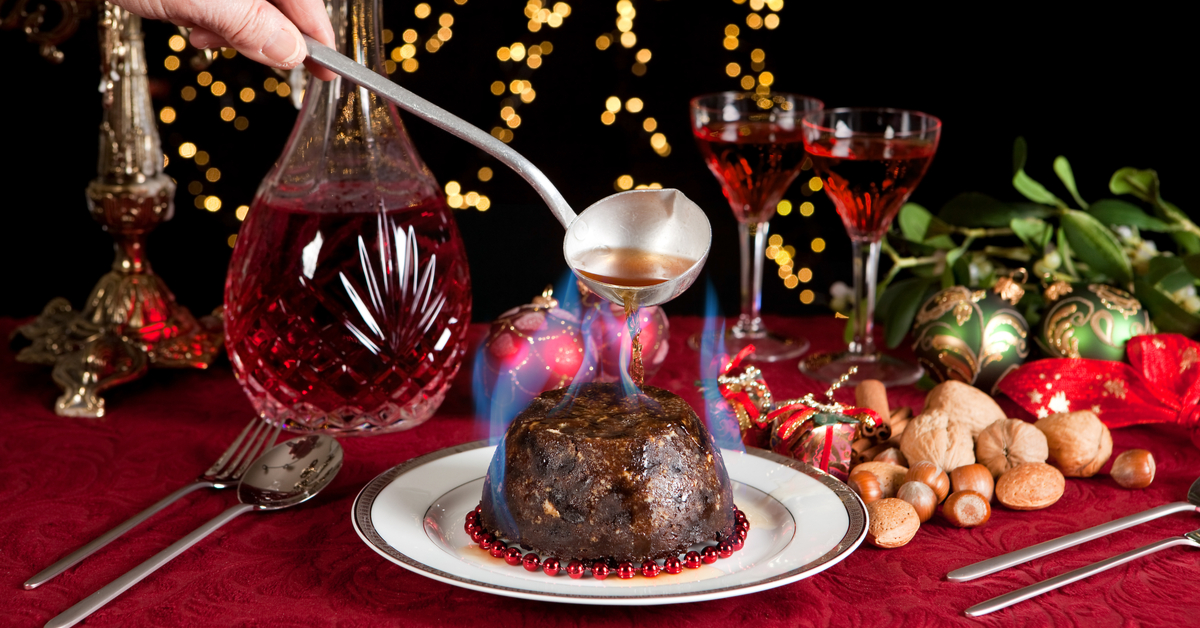 The days between Christmas and New Years in Ireland are a long celebration of food and drink. It’s about eating, drinking, and having fun with extended family and friends, and each meal can last for hours.

Irish families tend to be huge, so it’s quite common to have 30 or more people around the table. To feed them all requires several dishes and a lot of food, which is why traditionally, when the festivities start on Christmas Day, there is not just a turkey but also an extra ham. Christmas dinner begins at lunchtime but continues into the afternoon and evening. All the delicacies are washed down with cider and Guinness. The odd glass of wine can also be served, but wine is not a priority for the Irish.

December 26 is St. Stephen’s Day, when leftovers are well used. The side dishes and the sauce are equally important; accompanying the ham and turkey, there may be five different potato dishes and at least three sauces. The favorite dessert, plum pudding, should be prepared months in advance as it should soak well in brandy.

Traditional foods for New Years Eve are corned beef, cabbage, carrots, and onions. For digestion, there are shots of good whiskey or brandy.

Here are all the Irish food you must eat while on vacation – and how they’re prepared.

This is Ireland, so naturally the turkey has an Irish touch. It takes two days of preparation to produce this juicy bird.

First of all, it is marinated. For this you need a large pot with a thick lid. Add yellow mustard seeds, black peppercorns, bay leaves, brown sugar, salt, a few cups of water and six large cans of Guinness stout. Mix until the sugar and salt are dissolved, then put the turkey in it, close with the thick lid and marinate in the refrigerator for 24 hours. Take the turkey out and pat it dry.

Irish turkey is stuffed with sausage meat, onions, cloves, chopped canned chestnuts and fresh cranberries and transferred to a roasting pan. Cover the breast with the bacon slices and roast the turkey until tender.

Irish mashed potatoes, also known as colcannon, is super creamy because it’s made half and half with butter. They also include cabbage or kale. Other side dishes Boiled potatoes, gratin, Brussels sprouts, carrots, parsnips, turnips and fried turkey bacon.

2. Glazed ham with honey and mustard

Before the whole ham goes into the oven for glazing and roasting, it must be boiled in a mixture of water, orange juice, bay leaf, and clove-studded onions. Then it is simmered for about 1 hour. Transfer the ham to a roasting pan, make transverse incisions and insert the cloves. Glaze with a mixture of honey, sugar, orange juice and old-fashioned mustard. Baste the ham with the juice during cooking.

December 26 is St. Stephen’s Day in Ireland, which coincides with Boxing Day in the United Kingdom. St Stephen was a deacon in Jerusalem known for his charitable work, and he was the first Christian martyr.

It’s also a day to visit friends, most often for dinner, so, again, the meal should be filling. The Irish favorite is a hearty stew, made with leftover turkey and ham, all covered in a thick gravy. Guinness and cider flow in rivers to wash it all down, including thick roasted potatoes flavored with sea salt, pepper and thyme.

The Irish not only love their hearty meat and sausages, but also seafood. A typical starter would be smoked salmon or a shrimp cocktail made with a mixture of shrimp and crab meat.

A hot soup never hurts as a starter on a cold Irish Christmas, and colcannon soup works just fine. The ingredients are diced bacon, leeks, small red potatoes, thinly sliced â€‹â€‹cabbage and a dollop of heavy cream, all sprinkled with diced green onions for garnish.

Here is an overview of this tradition. In the 16th and 17th centuries, Ireland exported large amounts of beef to France, the United Kingdom and the United States. As a result, local market beef prices became too high for the average Irishman. Beef was considered a precious treat and was traditionally eaten on New Year’s Eve as a symbol of luck and wealth. The corned beef is boiled and simmered in a large saucepan until it has the desired consistency.

Cabbage, on the other hand, was readily available. Therefore, corned beef and cabbage, boiled in a separate pan with carrots, potatoes and onions, go together on New Year’s Eve.

Christmas pudding, called in Ireland plum pudding, is the number one sweet (and boozy) Christmas treat. It can be enjoyed as a dessert or anytime in between, even for breakfast.

Plum pudding needs a lot of preparation, and it’s no wonder – look at the necessary ingredients on their own! eggs, flour, cinnamon, nutmeg, chopped almonds, grated apple, brown sugar, the zest and juice of one orange and one lemon, raisins, sultana, candied cherries, candied zest, breadcrumbs, Guinness, spoonfuls of alcohol strong (like whiskey or brandy) and butter. The more variety, the better the pudding.

Mix the dry ingredients then the liquid ingredients until you obtain a dough lighter than a cake. If it’s too dry, just add more Guinness! Fill a bowl, cover it with parchment paper and a lid, and steam in a larger saucepan for about 12 hours. When the pudding has cooled, remove it from the bowl, sprinkle it with brandy and whiskey, seal it with a plastic sheet and let it soak for weeks.

Reheat the pudding before serving, then sprinkle it with brandy and light it. Don’t set your room on fire. You can decorate with a little cognac butter and a sprig of holly on top. Leftovers are heated in butter and a little more brandy is added for good measure.

Much like plum pudding, tarts are a Christmas and New Year’s staple and should be made well in advance. You can bake the crust yourself or buy it ready-made, but the topping is your own job.

Mix the ingredients, then add the sherry and brandy until well soaked. Cover and refrigerate for three weeks. If you need more liquid, add brandy. Then bake the crust, cool, fill with the mixture and bake until the edge is golden. Sprinkle with powdered sugar. When stored in a cool place, tarts keep for a very long time.

Bagatelle is a sweet and creamy dessert that is topped with alcohol-soaked sponge cake, custard, homemade fruit jelly, whipped cream, and fruit toppings. The concoction is served in a large glass bowl or in individual cocktail glasses to show off the pretty layers.

First come the genoise fingers, or any Swiss roll filled with jelly cut into slices. This is soaked in dry sherry until the sherry is well absorbed. If you’re up to it, you can make the custard yourself or buy it ready-made and pour it over the sponge. The next layer is fruit jelly, preferably peach or raspberry for color, and a thick layer of vanilla whipped cream is placed on top. Then decorate with sliced â€‹â€‹white almonds and any cut fruit you like. Serve chilled.

For a while I thought Irish Coffee was just a tourist product, but then my Irish friends convinced me it wasn’t. In fact, the Irish like to end their sumptuous Christmas dinner with an Irish coffee tour.

Here’s how it’s done: whip the cream until it’s still slightly runny, prepare a pot of strong coffee, and pour the coffee into a heat-resistant glass. Add as much whiskey as you want, sugar to taste and stir well until the sugar has dissolved. Then gently pour the cream on the back of a spoon over the coffee. It is not supposed to mix or sink to the bottom. If you want, you can sprinkle some nutmeg on top.

Nightcaps for a big night out: drink expert HELEN McGINN on the best drinks for twixmas

Nuts: Benefits and How to Include Them in Your Diet