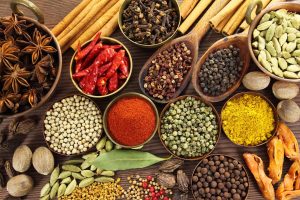 Indian cuisine is incomplete without a variety of essential spices. Everything inside a spice case in an Indian kitchen consists of numerous health benefits. Indian spices, in addition to altering the taste of food, have countless medicinal benefits. Rather, spices play an important role in medicine, cosmetics, pharmacy and perfumery, and many others. Spices also play a major role in curing diseases such as diabetes, cardiovascular disease, arthritis, cancer and AIDS.

Let’s discuss 7 such spices that play a big role in making food taste better and have multiple health benefits:

Turmeric (Turmeric longa) is part of the turmeric botanical group. It is used as an anti-inflammatory agent to treat gas, colic, toothache, chest pain, and menstrual imbalances. It is a leading medicine and it works as an antibiotic for healing wounds and removing scars and it is also used in cosmetic treatments. It is one of the best readily available and cheapest remedies for pigmentation. It is the most well-known therapeutic herb, with cancer preventive agent attributes.

Cumin – known to improve digestion and acts as a memory booster

Cumin (Cuminum cyminum) is one of the spices, because it contains volatile oil that gives aroma to its seeds. It also helps to get rid of various diseases such as dental pain, dyspepsia and jaundice. This spice is grown in many parts of India and is also exported to the international market in different forms like seeds, powder, essential oils, etc. It consists of many healing properties; therefore, it is also used by pharmaceutical industries.

It is an herb that has long been used in alternative medicine, it is also a most common ingredient in Indian dishes and often taken as a supplement. This herb also contains many health benefits. Fenugreek (Trigonella foenum-graecum) is a plant that stands about 2 to 3 feet (60 to 90 cm) tall. It has green leaves, small white flowers and pods containing small golden brown seeds. It has been used in Chinese medicine to treat skin conditions and other illnesses. Fenugreek seeds are also very beneficial for natural hair growth.

You won’t find any Indian who doesn’t like cilantro. Coriander has been used in Indian homes for ages to enhance the taste and smell of food. More importantly, cilantro is a culinary spice that prevents food poisoning. He comes from (Coriander sativum) plant and is related to parsley, carrots, celery, etc. It is also used to flavor international dishes. Coriander has many health benefits like; lower blood sugar levels, improve gut, heart and brain health. It also fights infections and protects the skin.

Clove (Syzygium aromaticum), is a tropical evergreen tree in the family Myrtaceae; small reddish-brown flower buds that serve as spices. Clove oil is particularly known to have medicinal properties. Clove oil is used in many torments like joints, muscles or nerve tissues, especially rheumatoid arthritis. It can be used as an analgesic. It also helps to get rid of skin irritations, bacterial infections, acne and pimples etc.

Cinnamon (Cinnamomum verum), also known as Ceylon cinnamon, is a bushy evergreen tree in the laurel family (Lauraceae) and the spice is derived from its bark. It is used to flavor meat dishes, rice and hot apple juice. The medicinal properties of cinnamon help in treating sore throat, stomach, tumors, fungal infections and spasms etc.

9+ Foods That Will Boost Your Energy More Than Coffee