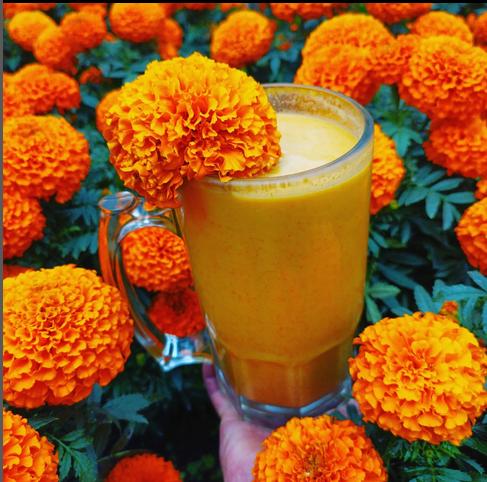 Dia de los muertos, the day of the dead, is observed across Mexico on November 1 and 2. The lively celebration includes colorful decorations and elaborate offered (altars) that offer food and drink to welcome the souls of the deceased back into the world of the living. And as long as there is signature dishes and drinks which must be present on every table and altar, some producers offer creative versions of some of the classics. Here are five you can enjoy in Mexico City right now.

Dona Vero runs a very popular restaurant, known for its menu offering unusual dishes such as quesadillas of deer marinated in mezcal and quirky seasonal specialties. For Day of the Dead festivities, she serves pulque – an ancient fermented drink derived from agave sap – infused with marigold flowers, known in Mexico as cempasuchil (cem-pah-soo-cheel). It’s a family recipe that his mother used to prepare the altar for her grandparents.

Cempasúchil flowers are emblematic of the festivities, believed to attract the souls of the dead to the altars with their strong and unique aroma. The flowers are edible, of course, and give a bright orange color to any food or drink.

The mildly alcoholic drink may be an acquired taste for some, but Doña Vero sells frosty cup after cup to her legions of fans.

To Panaderia Rosettecelebrity chef Elena Reygadas’ upscale bakery, the seasonal hit is pan de muerto. This soft brioche bread is flavored with anise and orange blossom water, decorated with strips of bone-like dough. It’s not a Day of the Dead celebration without it, widely enjoyed with coffee or hot chocolate for breakfast or late night dinner.

At Rosetta, however, they added a twist by coating the loaves in powdered corn husk ash before adding the traditional granulated sugar topping. The result is striking and delicious, and a tribute to ancient pre-Hispanic cooking techniques.

Heladeria Escandon is an ice cream shop owned by Ilian Castañeda Vázquez and Maximiliano Olvera García, in the heart of Colonia Condesa. Their goal is to produce artisanal ice cream and ‘punksicles’ in unusual shapes and flavors, showcasing seasonal offerings and creative combinations.

For Day of the Dead, Max transformed the entire case of ice cream into an ice cream ofrenda, with flavors reminiscent of the traditional foods usually found on people’s altars.

Among those depicted are the cinnamon cookie, guavatejocote (hawthorn) and double chocolate, alongside unusual offerings such as Mexican pumpkin, pan de muerto and, yes, cempasúchil. He uses fresh flowers to make an infusion, then adds tiny flecks of petals and leaves and mixes them into the creamy mixture. The result is soft and floral, with hints of vanilla cream. To accompany the ice cream, the team also makes dark chocolate skulls and golden pan de muerto.

Made from corn dough and filled with a variety of ingredients, gorditas are a street food staple in Mexico. At the famous Jamaica Market, in the ready meals section, Las Weritas are famous for their generously filled snacks with all the trimmings. This year, the popular stand takes them a step further by making them with blue corn and shaped like a pan de muerto.

The Nahuala is filled with sautéed squash blossoms and mushrooms, topped with Philadelphia cheese for an extra creamy consistency. If you like it spicy, order La Llorona, identical to Nahuala, but with added habanero pepper for that extra tear-inducing zing.

Last but not least, Cerveceria Modelo entered the flavored beer arena with Victoria Cempasuchil. Made in Mexico with cempasúchil flower extract, it doesn’t have the strong aroma or flavor of the flowers, but it is a unique infusion. Yellowish-orange in color, it is slightly hazy, with light floral and cereal notes on the nose. The flavor is sweet and malty, slightly bitter and refreshing. At 4.2% AVB, it’s meant to be paired with seasonal foods such as mole, spicy foods, and even pan de muerto.

Serve your guests these soft drinks on your Diwali party